This presentation was made back in 2010. Some parts of the content may have been irrelevant or obsolete as the technology progresses. However, this presentation can still be helpful especially for those who want to look closer into cloud computing concept and its implementation.

This is the last presentation from the series about cloud computing introduction. This part contains information about Google App Engine (GAE) and Hadoop quick-starts. Those who are interested in building their applications on top of GAE PaaS may find this presentation helpful. Obviously GAE has undergone some changes since 2010. So, please reflect to their changes accordingly. Similarly, those who are Hadoop first-timers may be curious about the its concept and how to use it in the big data realm.

You can download the presentation from the link below:

This presentation was made back in 2010. Some parts of the content may have been irrelevant or obsolete as the technology progresses. However, this presentation can still be helpful especially for those who want to look closer into cloud computing concept and its implementation.

This is the first part of two presentations about cloud computing introduction I prepared back then. The primary intention was to give students some basic ideas about cloud computing project they could work on by providing pointers and resources they might use in their projects. This presentation highlights cloud services, virtualization concept and provides some information on how to use some cloud service offerings like those provided by Amazon through Amazon Web Services (AWS), Eucalyptus through Eucalyptus Community Cloud and Github through its Git repository service.

You can download the presentation from the link below: 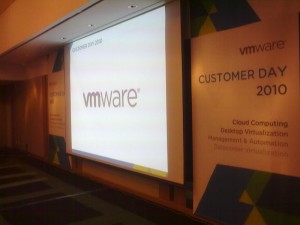 In his presentation, Mike talked about cloud computing as an emerging trend in the enterprise. He also explained key drivers and phases toward its adoption in the enterprises and an era of IT as a service powered by the cloud. He started with listing several IT challenges in the enterprise environment. The challenges he mentioned include the necessity to deliver more business value, the ability to move faster and stay ahead of the competitors, the competency to maintain secure and compliant environment, and the capability of maintaining a stable system. Legacy IT business model relies on infrastructure ownership and dedicated IT force. With the introduction of the cloud in the enterprise, CIO may consider the transformation from a pay-in-advanced system into a cloud-based, pay-as-you-go system.
END_OF_DOCUMENT_TOKEN_TO_BE_REPLACED

Concerns raised over the cloud computing are mainly related on how secure and reliable the cloud is to support enterprise-level requirements. The notion of offloading data and process to third party infrastructure or software providers in cloud computing may not be a sound idea in the enterprise realm. This article will briefly summarize private cloud, a type of cloud environment which is designed to be run with stringent requirements that may fit the enterprise-level SLAs.

Do you still remember the OLPC (One Laptop for Child) program and other (if any) with similar purpose? Let me help you lessen the time for googling by citing the mission of this program from its official cite, “To create educational opportunities for the world’s poorest children by providing each child with a rugged, low-cost, low-power, connected laptop with content and software designed for collaborative, joyful, self-empowered learning.”  From a recipient’s point of view, what could this be? The meanings and implications may differ however one thing for sure, the recipient -given the condition he/she can’t afford laptop at normal price- is given luxury at very affordable price, the luxury of owning the gate to access the advancement of technology.

Similar story now may be repeated in the near future in computation area. It’s less than decade from year 2000 but if we compare the computing power of a node (e.g.: standalone PC, server, workstation) in that year with today’s, the discrepancy is very significant. In less than a decade we have seen how computers are becoming faster and how hardware prices are becoming cheaper. These days, multi core processors are becoming more common thus multiplying the computation speed of those of single core.