If you are doing deep learning AI research and/or development with GPUs, big chance you will be using graphics card from NVIDIA to perform the deep learning tasks. A vantage point with GPU computing is related with the fact that the graphics card occupies the PCI / PCIe slot. From the frugality point of view, it may be a brilliant idea to scavenge unused graphics cards from the fading PC world and line them up on another unused desktop motherboard to create a somewhat powerful compute node for AI tasks. Maybe not.

With the increasing popularity of container-based deployment, a system architect may consider creating several containers with each running different AI tasks. This means that that the underlying GPU resources should then be shared among the containers. NVIDIA provides a utility called NVIDIA Docker or nvidia-docker2 that enables the containerization of a GPU-accelerated machine. As the name suggests, the utility targets Docker container type. END_OF_DOCUMENT_TOKEN_TO_BE_REPLACED 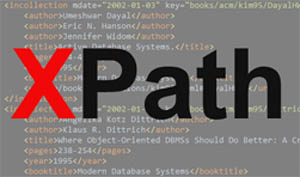 XPath is a W3C recommendation used to search and find parts of an XML document through a path expression. The elements or attributes that match the path expression will be returned for further processing by the invoking command, module, actor, or component.

In this post, I will explain about the basic concept of XPath via presentation slides. The presentation starts with a revisit to some of the XML key concepts. Subsequently, it shows sufficient elaboration of the basic concept of XPath. It concisely describes the key features of XPath that are worth knowing and practically useful especially when searching inside XML files.

The final part of the presentation consists of a sample project accompanied with some screenshots provided for readers to experiment with. In an upcoming post, I will show how the sample project can be converted into a Maven project for more convenient use and distribution.

You can download the slides from the following URL:

Having talked about spamming, in this post, I would like to shortly discuss about phishing, a technique for identity theft, which in my personal experience, has become more rampant these days.

If it is the first time for you to read this fancy term, phishing is an attempt to steal somebody else’s sensitive information such as username, password, credit card details, and other personal credentials usually done by sending an email containing a false claim to the target. The content can be a threat, warning, and other form of falsified truth carefully crafted to encourage the target to submit his personal credentials. As you may have predicted, phishing was derived from “fishing”. The “fisher” is the person who wants to steal the information and the target is the “fish”. The false claim is obviously the “bait” used to attract and hook the “fish”.

Identity theft is disadvantageous and can sometimes become disastrous to the victim. Let us take a case of a phishing attempt from a sender who falsely claims as your email account provider. The message contains warning to verify your email account by supplying your user account id and password. If you inadvertently submitted the requested information to this site, you might have never imagined how creative the phisher is in exploiting this private information they stole from you.
END_OF_DOCUMENT_TOKEN_TO_BE_REPLACED

In his presentation, Mike talked about cloud computing as an emerging trend in the enterprise. He also explained key drivers and phases toward its adoption in the enterprises and an era of IT as a service powered by the cloud. He started with listing several IT challenges in the enterprise environment. The challenges he mentioned include the necessity to deliver more business value, the ability to move faster and stay ahead of the competitors, the competency to maintain secure and compliant environment, and the capability of maintaining a stable system. Legacy IT business model relies on infrastructure ownership and dedicated IT force. With the introduction of the cloud in the enterprise, CIO may consider the transformation from a pay-in-advanced system into a cloud-based, pay-as-you-go system.
END_OF_DOCUMENT_TOKEN_TO_BE_REPLACED

If you are running Fedora Linux as a server, one issue you frequently encounter is strange permission denied error message triggered when you are accessing one of the available network services run on the server. There are a lot of network services to mention, but HTTP and FTP are two good examples of such services. Assume you are trying to access FTP server on your Fedora box. You type the IP address of the server and then supply the username and password. Voila!!! You thought you would be immediately logged in. But instead of seeing the files in your home folder, you are shown an error message. The error message may vary, from something like “Login incorrect for user blah” displayed by Midnight Commander, “500 OOPS: cannot change directory: /home/blah” from Total Commander, to other error messages shown by different FTP client programs.

If you are 100% sure that you supply the correct user and password information, why couldn’t you get in? Let us assume that you have root access to the server so that you can remotely troubleshoot from the console. This post will give some guide on how you can solve this problem based on common configurations of a Fedora server.
END_OF_DOCUMENT_TOKEN_TO_BE_REPLACED