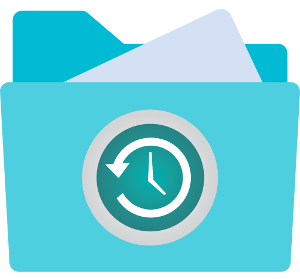 To use Time Machine, a user will click the Apple icon

in the upper left corner of the screen and then select System Preferences > Time Machine. The active window will display the configuration for Time Machine as can be seen in the following picture. 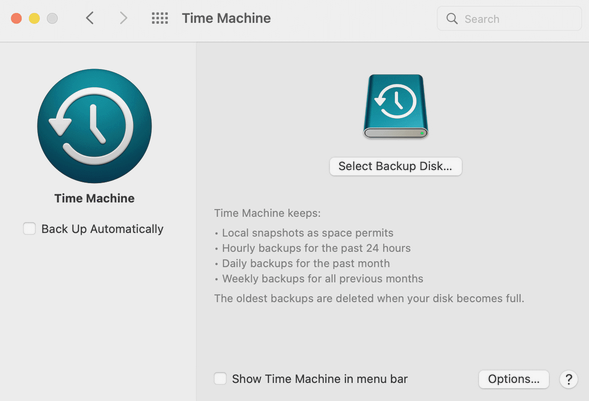 The option “Back Up Automatically” is not checked by default. This means that user manually performs backup by navigating to Time Machine tool and interacting with the GUI flow for the backup. Once automatic backup is checked, Time Machine will alter its behavior to create backups in the background without user intervention. The default interval between backups is one hour. The backup files or “snapshots” are stored in backup disk specified by the user in the Time Machine configuration.

By specifying the external backup disk, user might be not aware of the intricacy of Time Machine description that is shown on the configuration window.

The oldest backups are deleted when your disk becomes full.

That sounds pretty normative and somewhat intuitive for a backup procedure. But wait, isn’t this article about Time Machine gotcha?

Yes, indeed. A case in point is when we want to check remaining disk space from the Terminal before sinking overwhelming bytes to the machine by cloning tens of Node.js projects that each pulls more than 500MB dependencies to the node_modules directory. It is paramount that we have ensured that the remaining disk space is still sufficient.

We perform initial disk space check with df command from the Terminal.

We had this output displayed by the command line on the test machine.

The output informs us that the disk is almost full at 93% capacity and there is only around 36GB of free space to use. This should have turned into an alert that urges the user to free up some disk space.

We then compare this output with the GUI, as a a reminder that not everybody uses the command line. On Mac, the GUI for checking available disk space can be found by clicking the Apple icon

in the upper left corner of the screen and then choosing “About This Mac” menu followed by selecting the Storage tab.

Here was the display from the GUI.

Oops, the GUI presents different information! As can be seen in the picture, the GUI reports there are still around 108GB of free disk space, or 3 times more than the value reported on the command line.

When we have this stark difference of free disk space info displayed on GUI vs command line, big chance that one of the culprits is Time Machine local snapshots.

We can verify this by using a tool named tmutil, which as the name hints is a command line utility for Time Machine. This is an extensive utility, covering various operations related with Time Machine. The relevant operation or command under tmutil for listing the local snapshots is listlocalsnapshots, which should be invoked as follows.

Since we will list the local snapshots inside the root directory, the mount point is therefore /. The command hence becomes:

We tried running the above command on the test machine and had the following output displayed.

The output tells us that there is indeed a Time Machine local snapshot. However, there is no further info on the size nor additional option/parameter in the command to embed information about the snapshot size in the output. This means that we can only know the size occupied by the local snapshots after invoking command to discard them and then calculating the free disk space reclaimed.

The Time Machine local snapshots can be purged partially or completely. Partial snapshot removal comes under the term “local snapshot thinning” that is associated with thinlocalsnapshots command.

If we want to completely remove the local snapshot, we use deletelocalsnapshots command instead.

A full Time Machine backup usually occupies sizable disk. We can showcase both snapshot purging options by performing the removal in two stages.

From the output, we can see that the snapshot still exists but the size should have been trimmed. However, we don’t know how big the remaining snapshot is.

Our last resort to reclaim more space is by completely removing the local snapshot. For the test machine, this was the command used. Note that for snapshot_date argument, we took the date part of the snapshot file name.

We confirm that the snapshot has been removed by listing the local snapshots once again.

The test machine did not list anything, which is great. In theory, this means that some free space has been reclaimed. This can be confirmed by running df command once again.

Here is what was shown on the test machine.

It might be an elegant way of spending an afternoon trying to figure out the answer.