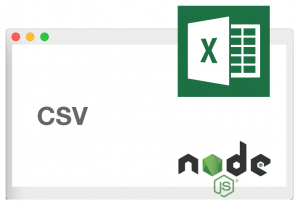 Let us a run experiment to explain this case. We will use Node JS to create a CSV file, encode the file using UTF-8 and then try to open it using Excel on MacOS.

The Node JS code that we use to create the UTF-8 CSV file is as follows.

If you’re not familiar with Node JS, here is the explanation about what the code is doing line by line.

Line 1: The built-in Node JS fs module is used to handle the process of writing the UTF-8 CSV file
Line 2: We also use Node JS path module to build file path for storing the CSV file
Line 4: We use semicolon ‘;’ to separate fields in every row entry
Line 6-7: The content of the CSV file. There are two rows. The first row only contains single-byte latin characters. The second row contains mix of latin and multi-byte east asian characters that are represented by Korean phrases.
Line 9: We concatenate the row entries. Each row is appended with newline character “\n” so that the second row goes to the next line.
Line 11: We declare the output CSV file name. We put the file in the same directory with the JS file
Line 13-19: We write the row entries using UTF-8 encoding into the output CSV file.

As seen in the snapshot, the Korean characters are displayed properly. Now, let’s open the same file with Microsoft Excel.

Suprisingly, when the CSV file is opened with Microsoft Excel, it exhibits two kinds of unexpected behavior:

It turns out that Excel on MacOS will display multibyte CSV file properly if the following rules are applied when generating the file:

If we apply these rules to the Node JS code that generates the CSV file, the code shall be modified as follows:

There are three main changes made in the modified code:
Line 4: The field separator is now changed to tab character from semicolon
Line 9: We add Byte Order Mark (BOM) 0xFEFF to explicitly hint that the string data is encoded in UTF16-LE
Line 13: We change the file encoding from UTF-8 to UTF16-LE when writing the file to disk

After applying the rule, let’s see how the content is displayed. First, we open the file using the text editor.

Again, the Korean characters are displayed properly. We also see that a field in a row is separated to the next field by a tab. How about opening the file in Excel? So, here it goes.

Unlike the previous setting with UTF-8 encoding, this time the content with the Korean characters is displayed properly.

To summarize, if you’re creating a CSV file with multibyte characters for example those of East Asian languages and you want to open it in Excel on MacOS, make sure that:

We use Node JS to generate the multibyte CSV file in the example. It is important to note that Node JS will not add BOM when writing the file even though the encoding is specified in the option. This leads to interesting behavior when trying to write data that contains multibyte characters.

1. When writing string data that contains multibyte characters without BOM-prefix into a file, certain text editor would fail to display the data properly even though encoding is set to UTF16-LE.

If we open the file created using this approach in Mac’s TextEdit and Sublime Text, we will see that TextEdit fails to display the content properly even though Sublime Text does not disappoint. 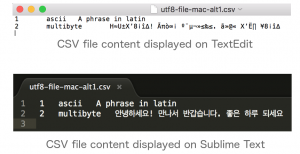 We then use a hex editor to view the content of the file as hex characters.

As seen in the picture above, there is no BOM character at the beginning of the file.

2. When writing string data that contain multibyte characters without BOM-prefix into file, text editors will properly display the content if it is converted into buffer and then converted again to UTF16-LE. However, it will not be displayed properly on Excel. Also, the tab character has no effect in separating the fields in a row.

The file content when opened in text editors (TextEdit, Sublime Text) can be seen in the following image. 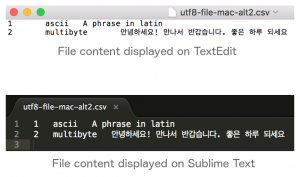 As shown in the image, content is properly displayed. However, this does not hold true when the file is opened in Excel.

We then use the hex editor once again to display the file content as hex characters.

3. When BOM is added at the beginning of the content, text editors and Excel displays the content properly.

We verified the existence of BOM, by analyzing the file content again in the hex editor.

As seen in the picture, the BOM exists at the beginning of the file (red box), which results in the file content displayed properly when opened by various applications.

A rule of thumb would be to always prefix file containing multibyte East Asian characters encoded with UTF16-LE with BOM. When such file is programmatically created by using Node JS, the BOM character must be manually prepended since Node JS does not automatically add BOM to the data.