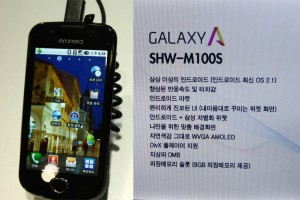 The release of this smartphone may heat up the competition in the smartphone market which is currently dominated by Iphone from Apple. An effort from Samsung to establish a social hub as a place of content exchange and widget market can be seen as a similar attempt with what Apple has done so far with its App Store. It can’t be neglected that the existence of a big array of exciting and useful widgets and contents is one of the factors which attract users to keep using a certain product.

I had the chance to try the gadget and test some of the functionalities. I concede the claim mentioning the touchscreen is more responsive. However, to certain extent I feel that the user interface is somehow similar with that of Iphone. Nevertheless, the similarity could be a driving factor for the users currently using similar interface in other products to also try this new gadget. The notion that Android is the installed OS exceeds my expectation of what an Android phone can offer. I could not testify the quality of either streaming media or voice call since such features were disabled at time. However, I can say that this smartphone is potential to be a serious contender to current incumbent.

2 thoughts on “Samsung Galaxy, New Android Phone to Compete in the Smartphone Market”