In a country where being digital is an articulate part of the lifestyle, some talk about internet speed and accessibility can be fascinating. This time, it’s a short story about pervasiveness of the internet in South Korea, the home for Samsung, currently the world’s largest electronics company and a part of the conglomerate that contributes for more than 20% of South Korea GDP. 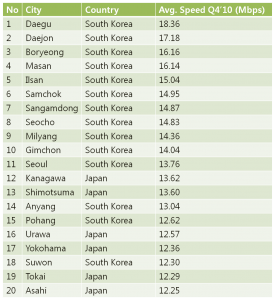 South Korea benefits from its relatively small size which helps reduce the cost in building internet infrastructure. Nonetheless, the national policy to make broadband internet easily accessible and affordable can be the crucial factor that contributes to the country’s giant leap in information technology. Broadband connection via fiber-optic cable spreads over the country, from big company offices in downtown area to suburb apartments and residence. I will give an example from my personal experience. My connection is home connection rated at 100Mbps. The connection is provided by one of the Korean telco companies. Installation fee is free and modem is provided. The modem is directly connected to a fiber optic network that goes through my residence. You may think that the monthly bill will be somewhat costly. Surprisingly, it only costs me around $23 monthly. Download speed is always near to the rate and upload speed is a little bit less but understandable given the nature of the network. I attach the results of two network speed tests taken in one week interval below.

With the readiness of its network infrastructure, it won’t be that surprising to read the news that South Korea will replace books with tablet computers by 2015. To a bigger extent, Korea should be theoretically ready for realizing the concealed power of cloud computing, storing and accessing resources anywhere, anytime without the horror story of terrible network latency.