The image basically functions as the initial canvas. As the game is started, the canvas will be redrawn after certain interval based on input given through mouse-clicks and algorithms of pacman-enemies’ movement. As for example, you can see how the image has been changed into the following one.

It is interesting to know how the Pacman game has transformed from a console-based game into a web-based one. While one may speculate that fancy server-side technologies were used to run the game, the nature of the Pacman doodle’s game is actually plain HTML combined with Javascript and CSS. Recent advances in HTML, particularly the development of HTML 5, have brought some cool features enabling modern web application to behave more interactively and similarly to desktop applications.

If we take a look at the HTML source code of Google homepage during the Pacman doodle’s day, we can see that Google has implemented some HTML 5 features in their code. Starting from the doctype definition, it is obvious that the doctype is an HTML 5 one. The way the source codes were written has also undergone changes, from explicit HTML codes to javascript-encapsulated HTML codes.

If you also wonder about the javascript code behind the game, you can directly see it from the logo’s directory or review the code here.

In the past, some web evangelists proactively advocated compliance to W3C standards. Besides using standard tags and attributes, a part of the compliance could be interpreted as clear and well-structured outputted HTML source code. However, big companies at the time (and also these days) might think differently. If condensed source codes which are less human-interpretable but still machine-readable could speed up the load of a web application then compliance to the standard is not the top priority issue to tackle.

Users like cool features. Users like interactive applications. Users like speedy application load. Users care less about how well-structured the code behind is. The web application developers and companies’ task is to cater to and satisfy user needs. So let’s welcome the new era of interactive HTML with encapsulated codes and let’s see the development of new tools and methodologies for analyzing the web source codes.

In the mean time, you can check this cool Teenage Mutant Ninja Turtle game from Marc Grabanski which was also developed in pure HTML combined with javascript and CSS. 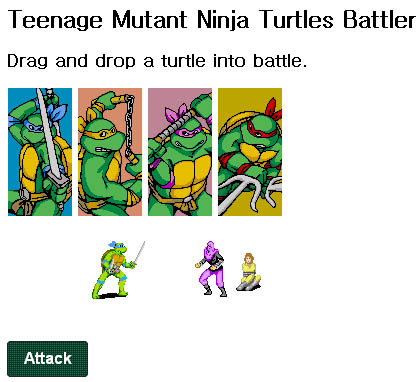