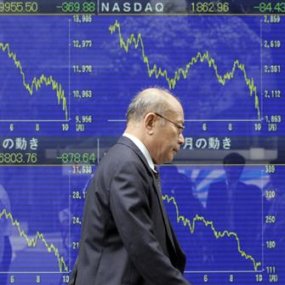 Last week was a global disaster for stock market. As you might have seen in the news broadcast, it was totally red for worldwide stock markets. Not only Wallstreet, European and Asian indexes also plunged deeply until the final day of transaction last weekend. Only gloom and fear (and maybe some tantrum and mutter) occupied the trade floor.

Nobody can assure when the trend will turn around to the positive track and stock markets make their comeback. Although the stocks have showed the rebound today, I’ll stay skeptical and be very prudent to say it’s the end of the negative slope.

One thing for sure, continuous stock decline brings harm to the industries. It’s easily explainable that falling stock price is associated with less bright future of a company and it makes sense that investors are unlikely to invest the capital in a business that gives nothing in return. However, the fallacy of a single company in many cases will only bring impact to a smaller scale. When the decline is massive and global, the issue will be shifted to the impact to national economy and when it involves the big-giant nations, turbulence in their economies will also affect world’s future economy prospect. It’s pretty understandable to see how this issue has forced global leaders to march up and set up the paces, reinforce together and discuss viable solution to this crisis.

It’s interesting to analyze the trickle-down effect of the global economy downturn to the IT sector. To a major IT player like India, the economic slowdown in US has significantly affected its IT industry. As India relies on outsourcing business, especially its small and medium enterprises, deceleration in outsourced work will result in decreasing revenue. It will add more burden to fixed operational costs hence forcing companies to tighten their budget by cutting fixed costs including the number of their employees. For freelance workers who are not associated with certain institution, the slowdown should have brought the effect earlier since they might have struggled with scarcity of jobs and tougher competition compared with that of normal situation. We can call this phenomenon as shadow unemployment since the skilled labors get unemployed because of the shrinking market instead of their capabilities. Shadow unemployment combined with real unemployment altogether brings perfect sense of a red-alert alarm that rings the national stability bell and delivers a wake-up call for country’s elites.

Previous example is a paraphrase of logical consequence of the economy downturn to a country which relies heavily on IT sector and foreign market. We’ll now visit the target market itself and see how this event changes the behavior of its components. First, we’ll define two essential components in the target market with respect to its suppliers: direct buyers and indirect buyers.

Direct buyers deal with business contracts or provisioning from commodity or service providers or sellers. They establish trade links with arrays of prospective sellers worldwide. As buyers, they have capital to spend either for their own consumption or in investment or product chains. The indirect buyers, here we can also use the term “primary buyers”, are often entangled with the government, and together forming invisible dependency net. The government shall not let them fall since they contribute a big portion to national revenue and growth and to certain extent they symbolize the national pride and economy power. Forget Adam Smith’s invisible hand theory and the pureness of self-autonomic free market. The government stains the purity by stipulating some policies correlated with the primary buyers’ activities.

Next, we have indirect buyers that buy goods or services from the primary buyers, thus becoming target of domestic market. This kind of buyers are also open for direct negotiation with sellers abroad, but with lower scale due to the upper bound limit of capital. We can reflect them in such representations of salary men or small entrepreneurs. Talking about economic activity, these buyers usually do purchasing for personal consumption and sometimes, limited investments.

At the macro economy level, we have seen how several countries have revised their national growth rates. Consumption usually contributes a significant factor to the national growth. If the growth becomes sluggish, we can expect that consumption may experience negative trend or grow in an almost stagnant inclination.

Let’s shift to the micro scale.  There is an anecdote saying, people buy what they like and seldom what they really need. This infers that purchasing is also a matter of emotional state. When propensity to consume is high and the wallet allows to do so, the probability of ineffective purchase will go higher. However, when the financial situation is tight, people become more logical and buy things based on the priority.

IT products and services are often considered as side purchase. This assumption often infers such purchase is tertiary and not of urgency -except for business with IT as its core. When this assumption is applied to the indirect buyers’ side, we may see how they reschedule or postpone their purchasing plan for IT products and services and go over with their most urgent list. As these buyers create support link to the primary buyers, this also transmits a negative signal for the rest of the symbiosis. For a longer period of stagnant or negative purchase growth , the primary buyers in IT sector will also suffer from this situation and surely the sellers will also do later on.

The indicator is easy to notice. Let’s wait for average IT salary and job availability in the beginning of 2009. It will tell us what to do and where to resort the drowning ship.

4 thoughts on “How Deep Will The Global Economy In Turmoil Bring Impact To IT Sector?”