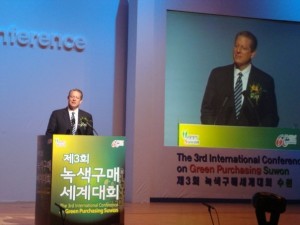 The conference was organized by International Green Purchasing Network (IGPN), an organization which promotes green purchasing across the globe. It was sponsored mainly by the Korean government and some UN committees. Former US president Al Gore who was awarded as Nobel peace prize laureate in 2007 was invited to deliver the keynote speech. He spoke about the importance of living green to sustain the environment and do our work in ensuring that future generation would still be able to live on earth conveniently. He mentioned that climate change is a real issue and should be addressed through fast-paced global collaborations. The temperature rise issue, melting arctic ice issue, and some other environmental severance issues are wake-up calls to governments, companies, and also to individual consumers to take care more the behavior in living. Therefore, purchasing goods through green purchasing method is one of the methods an individual, company, or organization can contribute.

The green jargons have been becoming more widespread these days. The IT field is also not an exception; green jargon has also reached the field. We might have heard whispers about green IT somewhere on the Internet or other media. How green IT is associated with green purchasing? How these jargons will affect the IT market in the future? Several opinions can afloat and just like other enthusiasts, I’d like to ponder some of my thought in this matter.

Aligning IT Strategies to Achieve Green IT

There is a global consensus aiming at ensuring average global temperature rise to remain below 2 degree celcius above pre-industrial time by 2050. As this consensus is ratified by countries worldwide, it will start pushing industries to work on their manufacturing process and end products. As we know, temperature rise is caused by the increasing concentration of green house gas in the air. The green house gas itself is produced in factories as exhaust of combustion process and accumulated over time. Besides emitted gas from factories, other entities like machines, devices, houses, and buildings also contribute to the production of the gas, directly and indirectly. As the time goes by, the world becomes more populated. Consequently, the production of the gas will be apparently accelerated as the number of green gas emitters skyrockets unless world citizens agree to change existing devices, equipment, and ways of life, and later switch to a more sustainable one.

IT products we use for daily activities; PCs, laptops, smart phones, and other gadgets, and also enterprise computing nodes; servers, mainframes, switches, etc are products of manufacturers that may or may not contribute to the worsening of green house gas concentration. Using the products consumes energy. However, the energy might be generated by a non-green process, for e.g. power plant fueled by fossil fuel. So, what does the current state mean with regard to achieving greener way of life?

The power to kickstart enforcement of policy is possessed by the ruling government of a country (usually with pressure from international community). In accordance with green purchasing and ratification of consensus on climate change, governments over the world may start stipulating policies which enforce industries to comply with “greener industrial or manufacturing process” and also “greener end products”. Industries should anticipate this by allocating their resources to analyze how their system can satisfy the checklists in the requirements. Industries may put more care in green procurement through modification of the supply chains. As an example, industry will only use materials produced by a green supplier and reject non-compliant material which does not meet green standard. It is also natural for industries to exert more effort in researches that end with green products. If we take the gadget example, it would be an energy-efficient gadget. Besides those internal efforts, external efforts like educating users to prefer green products in daily use is also essential. This will synchronize the process of transforming the overall business process to a more eco-friendly one with maintaining the consumer base.

One of the speakers in the conference said that “compliance is not a matter of cost”. My skepticism told me that going green would incur significant cost to a company. Hence, the executives may start thinking about their most appropriate green strategies in order to standout in the future green IT market.