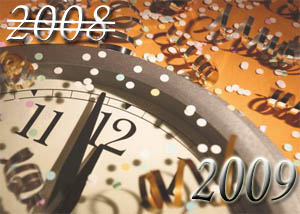 It’s the end of this year and I think it will be worth noting some important events in this year that have brought memorable, shaking, crucial, or unimaginable experiences and impact wordwide. This year has been a year of ups and downs, a year that invalidates prediction and forecast by top firms and analysts.

I noted two most important milestones in this year that contributed significant triggers to current downturn and. To mention the first, it was the exploded subprime mortgage crisis that dragged some giant financial institutions to bankruptcy and some other facing difficulties in their liquidity. There are chains of reactions happened there and as the final results we can see the global economic slowdown, sluggish growth, and negative outlook which are contrary to what was expected in the beginning of 2008.

The oil price also made its record this year. It went to record high in the middle of 2008 before deeply plunging in the last quarter. During the price surge, oil exporting countries might get super benefit from the soaring price. However, as some economists advised, irrational oil price may harm the industry and bring trickle down impact to larger size. It’s logically explainable that higher oil price also means adjustment in product price. If it goes beyond tolerable market price, purchasing power will decrease which literally hints oversupply and less purchase. Consequently, industries will start facing throttled revenue and are prone to losses. Losses are easily transformed into mass layoffs, a situation that brings employees who are also consumers into jeopardy.  Meanwhile, less consumption from overall consumers is interpreted as deceleration in economic growth, a situation which is always avoided by a sovereign country.

When soaring oil price met subprime crisis bubble, the burst sprinkled distributed, globalwide recession as we see today. The final quarter of 2008 was hard time, not only for trade or wholesale companies but also IT companies. A company as big as Google, for example, had to layoff its contractors to reduce expenses. More similar stories exist but I won’t go into details here.

And now, 2009 is waiting. What story will it be? I hope optimism and positive trend will find the way to triumph over current doom. Otherwise, I might later have this blog turned into a  wall of sorrow.